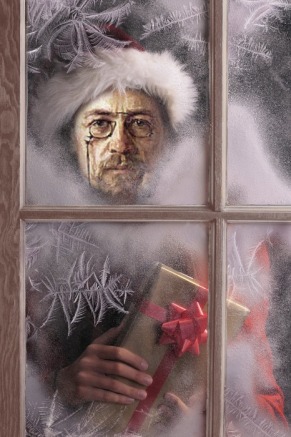 “He’ll come down the chimney tonight,” Father grumbled, his hand caressing the barrel of the Frog Shooter on his lap.

Father was sitting in Mother’s little chair in front of the fireplace. His dollar store sunglasses hung crooked on his honker. He was six-foot two, or had been before developing his post-divorce slouch, and 240 pounds. In Mother’s little chair, he looked like ice cream spilling over the sides of a too-small cone.

“How could you possibly know that?” John asked. He was zipping his coat, his back to Father.

“I just do,” said Father, shaking his jowls as if it ought to be perfectly clear. “Am I not allowed to know things anymore?”

John pulled the curtain aside with a finger and glanced into the blackness outside. “I only know known knowns.”

Not the response Father wanted. I knew it. John knew it.

“There you go again,” snarled Father.

“What?” said John. He had a way of saying what that was part question, part dare to question him. He knew exactly what, and he knew better than to ask.

“You know what. Knnnock it off!” Father had a way of emphasizing individual phonemes of one-syllable words.

“Roger that. Knocking it off, sir,” said John, checking his watch. He was in rare form tonight. Not caring how far he pushed Father.

“Where do you think you’re going,” said Father.

He was really pushing it. Good thing Father was distracted.

“There better. Not be. Any. Drinking,” said Father. Whenever Father came to a full stop between words, we knew he himself had been drinking. It was his trick to avoid slurring his words. He didn’t know he wasn’t fooling anyone.

“You’re not fooling anyone,” said John.

I didn’t appreciate John saying that. He was going out. I wasn’t.

At that moment came the clatter of metal against metal, from the general direction of outside the house and against the gutter.

The ladder, I thought to myself.

“You see?” said Father to John.

The ladder rattled as a mass ascended it. A human mass. A human male mass.

A rumble and a curse, as a body pulled itself onto the roof.

Footsteps as feet crunched across shingles.

Father gripped the handle of his Frog Shooter and gave it a pump.

“Like an old pro,” said John, his back to Father as he peeked out the window.

The Frog Shooter was an air pistol Father had bought to shoot frogs that got into his swimming pool. After he bought it, the frogs stopped coming. Father was disappointed that he never got to use his Frog Shooter to shoot frogs, but he said it was money well spent. The purchase had been efficacious, he said. It had solved the frog problem, he said.

John said there was a pretty significant hole in that logic.

Scratching and scraping sounds puttered down from the chimney and out the fireplace. Coughing and wheezing followed.

Father had not moved from Mother’s little chair. Still wearing his dollar store sunglasses, which he called “shades,” he swung the barrel of his Frog Shooter towards the fireplace. Debris fell from the chimney. Dust billowed into the room. Boots dangled, then landed. A pair of bare, pale buttocks hit bottom. A torso wrapped in a red and white Santa coat came last. A head was likely involved, but not yet visible.

Father pumped the Frog Shooter, his eyes probably on John (hard to tell, covered as they were by his shades) then swung it back towards the fireplace.

A soot-covered face poked out of the fireplace. “Pete? That you? What are you -” ph-pop! “Stop shooting me!”

“Step. Out. Of That. Hearth. Charley,” said Father. It was a good trick, speaking that way, even if we all knew it was a trick.

My Uncle Charley elbowed aside the black mesh screen of the fireplace and tumbled out onto the carpet, his soot-covered bottom leaving black trails across the carpet. A cloud of ash followed him, and the room began to stink of smoke. I fought back a cough. I didn’t want to be the first to cough. Neither Father nor John had coughed yet.

Uncle Charley stood up, dusted himself off, and said, “Merry Christmas, guys.”

Uncle Charley’s chest heaved while he tried to catch his breath. His eyes bounced from me to John to Father. To Father, he said, “Pete, what are you doing here?”

The part of Father’s face that was not covered by his oversized, crooked shades was expressionless. “I. Live. Here,” he said.

What Father said was true in part. Father did live here, in Texas. In fact, he lived down the street from Mother, in his own house that wasn’t this one, but was in the vicinity.

Father considered this. Then he nodded. He said, “You live in Florida.” Then he pumped his Frog Shooter and took aim at Uncle Charley, who turned and covered his bare ass with his hands.

Goddammit! said Uncle Charley, jumping up and down and flapping his hands.

“You make love to my wife on Christmas Eve, that’s what you get!” shouted Father, who hadn’t moved from Mother’s chair.

“She’s not your wife!” said Uncle Charley. “You been divorced twelve years!”

Father considered this. Then he said, “You’ve been my brother longer.”

Father considered this, too.

“Touché,” he said, finally. He ran the tip of his finger under his shades and flicked away a tear. He wiped his finger on his shirt.

A car horn sounded outside.

I ran up to John and tugged on his coat-sleeve. “Please take me with you.”

John yanked his sleeve out of my fingers, then looked at Father. Then Uncle Charley. He shook his head and said nah.

He considered this for a moment. And for that moment, I really thought he was going to take me with him.

Then he said, “Half brother.”

He walked out and shut the door behind him.

It was the meanest thing anyone ever said to me.

105 thoughts on “Shoot That Frog: A Christmas Comeuppance”