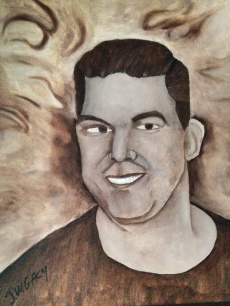 Clowns are pretty much automatically creepy. But what about a clown who does lots of very bad things, then paints a portrait of your spouse? Kristen of byebyebeer is the next guest poster of the season with this creepy piece about a creepy thing that is very creepy. Yikes!

The creepiest thing I used to own was a shark fetus in a mason jar. I had dissected a shark in zoology class and bringing home her perfectly formed baby seemed the only way to cope with the heartbreak of cutting in to find it there. I poured in some formaldehyde and screwed the lid on as tight as I could and had a biohazard on my bookshelf shelf until my parents moved while I was out of the country and I asked them to please dispose of my shark fetus. Also, please do not drop it.

Now the creepiest thing I own is a John Wayne Gacy, Jr. portrait of my husband. It was part of his dowry, so technically not mine. I am okay with this. An ex-girlfriend commissioned it from Gacy when he was in prison. At first it was intimidating but ultimately a relief to know I will never top this gift. Gacy must have painted this during his Brown Period because he gave my husband brown eyes even though his are swimming-pool blue. He also gave him a swirling halo of brown for his aura. Had I seen this earlier in our courtship, it’s hard to say how things would have turned out.

This painting is not worth so much, probably. Gacy’s clown portraits must go for a killing, but who would want a brown painting that looks like it was painted by a kid who didn’t make the cut for the mall art show? We hang it in our home anyway. This was a sore point at first. First my husband hung it in the living room but the plants died and we started bickering over dumb things, like who emptied the dishwasher more often, and the cats started acting really strange. Then we realized this had nothing to do with the painting but I made him move it anyway to the office on the wall directly behind the door so I could decide if I wanted to be haunted that day or cover it with the door.

It’s back in the living room (he put it there, I think) and the other day our daughter asked about it and I had to explain that it was supposed to be her father and also who painted it. She had never heard of John Wayne Gacy so I told her he was a man who dressed up like a clown sometimes and killed a lot of people, though not at the same time. I didn’t mention how he was a father from Chicago because her father is from Chicago. I didn’t try to explain Gacy’s murderous condition on a swingset-related head injury because I had been hit on the head myself with a metal pole in 1982, plus there was a baseball bat incident in 1978 and obviously I should have worn a helmet at all times, but I turned out mostly fine. We all have dark secrets, I suppose, but we don’t all bury 27 men in our crawlspace or even have crawlspaces. Maybe crawlspaces are a bad idea.

Which one of our girls will inherit the Gacy? Will they fight over it once my husband and I are gone? Will they forget what it is and donate it to Goodwill? I can picture it now, propped next to a noticeably better painting of a sad clown, forever beckoning in brown for us to look beneath our floorboards.

29 thoughts on “The Creepiest Thing”