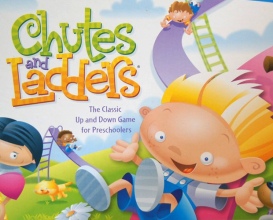 There is a game called Chutes & Ladders. You may remember playing it as a kid. I don’t. I’ve always known there was such a game, but I have no recollection of playing it. Not until recently, anyway.

Let me tell you something. You want no part of this game. This game is from Hell. This game was conceived by Satan in the pits of Hades by Morlocks, or Orcs, or some such. Imagine deep down in the bowels of a vomitous volcano, in a cavernous space where flame rises from infinitely deep canyons and silhouettes of nightmarish creatures raise metal tools high overhead, bringing them down on hard metal, clanking rhythmically, perhaps singing in some evil tongue that others won’t utter even in the full light of day. In such a place, this game was forged.

Problem 1: The box says it’s for preschoolers. This is a vicious lie. Preschoolers can’t comprehend the movement of the pieces. Left? Right? Up? Down? Their heads are spinning, and they always move in the wrong direction, thereby prolonging an already never-ending game. Advantage: Satan.

Like Hell itself, this game is torturous and never-ending. There is nothing you can do to make it go faster, or to end it. It is entirely out of your hands. You can spin a spinner. You can move the number of squares indicated by your spin. And you can go forwards a space or two. That is all. Then you wait.

You wait for your next turn at the spinner. You spin again, and you may advance a space or two. You might also land on a ladder, which may advance you a level or two. Or six! The six might seem great, but do not be fooled. For no matter how many ladders you land on, no matter how high or far you climb, you are equally at risk of landing on a chute which will cause you to plummet one or two levels, or six.

Do you see where I’m going with this? 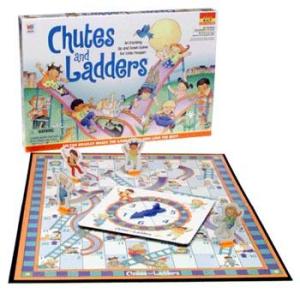 Problem 2: Preschoolers can’t comprehend the concept of ladders and slides on a board lying flat on a table. They land on a square, they want to slide or climb. They don’t care whether it’s a ladder or a chute. They’re going for a ride. Advantage: Insanity.

If you guessed nowhere, you are correct. Because this game is bereft of strategy. Players have absolutely no control over their fate. They are at the mercy of the spinner. And the spinner is brutal. You may think you’ve lucked out by landing on that big ladder that rockets you to the top. No matter. You will land on a chute, and this chute will suck you right back down.

And you will never land on the one square with the ladder that takes you to the winning square. Ever.

You will also never land on the winning square on your own. You have to spin the exact number of squares needed, according to the rules. This will never happen, as your spinner is rigged by Hell not to land on that number. And because in between you and the winning square are too many chutes for you not to land on one and be sucked right back down into the fiery pits.

This is how the game works. Chutes and Ladders indeed. A never-ending cycle of rising and falling, of being tossed about by the turbulence of life. Sometimes you’re up, sometimes down. And just when you think you’ve won, the whole thing crashes down.

This is the cruelest, most miserable game I’ve ever had the misfortune to play.

And my girls love it.

I can’t blame either one of them. It’s not their fault. The game is unwinnable. It’s evil. It’s foul. It’s the Ouija Board of children’s games. No one should ever go near it. There are dark forces at work here that shouldn’t be woken. They don’t want you to win, but they don’t want you to lose. They just want to destroy you. And they’ve created the perfect game to do it.

Stay away from Chutes & Ladders. Stay far away.

44 thoughts on “Chutes & Ladders is an evil game that wants to destroy me.”