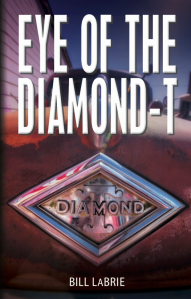 When I was thinking about starting a blog, I thought I might do occasional reviews of books and movies. After I started blogging, I realized that enough people were already reviewing books and movies, and many of them were very good at it. I also realized that my opinions were far too Siskel and not enough Ebert. In other words, I was too critical for anyone to benefit from my reviews. Good critics like some things, and some other things they don’t like. I like almost nothing, and that makes me a great ass, but not a very good critic. I posted one review, if you can call it that, which you can read here if you’d like. Then I decided to do other things.

But when I like something, you ought to listen up. ‘Cause I’m fairly picky.

I discovered Bill LaBrie’s blog, I Question Your Questioning, about a year ago and I’ve been enjoying his writing ever since (hence the link down and to the right on my sidebar.) I’ve been looking forward to his novel, Eye of the Diamond-T, for about as long, and it is now available.

You can read a synopsis here. You can read reviews with plot summaries here. That’s another why reason I’m not a good reviewer. I don’t like reviews that are full of plot points, and apparently I’m in the minority there. My kind of review gives me as little information about the plot as possible. When I want plot points, I know where to find them. In the book.

All of that said, Eye of the Diamond-T fooled me. Or maybe I wasn’t paying close enough attention in the beginning. It doesn’t have much of a plot. At least not a traditional plot. It begins in media res after a truck driver has crashed his rig while being pursued by two unidentified men clearly up to no good. The hook did exactly what an in media res hook is intended to do. It engaged me, and made me want to know more. Thing is, it got me ready for exactly the type of book that this book is not. I was all set to find out who these guys were and what they wanted from the main character. I was anticipating thrills. Action.

But it shifted gears into another time and place and I thought, ‘okay, we’ll see where this is headed. I can be patient.’

Then it shifted gears again, and I thought, ‘okay, I’m starting to wonder if this is heading anywhere.’ I began to lose patience. It kept reminding me of The Long, Sandy Hair of Neftoon Zamoora, by Michael Nesmith, the former Monkee.

And then I realized the track I wanted this book to get back on was my own track, not the book’s. I realized it at about the same time the book itself started getting mystical, which may or may not have been the intent, but kind of worked out well for me. When I realized I was being unfair to the book, my experience of it changed almost immediately, and I began to enjoy it for what it was – its own unique thing, which didn’t conform to any preconceived notions of what it is or what it should be. I realized it did not intend to answer questions but to raise them and to make me think. As one of the Native American characters says…

[My daugher] is made of stars. Just like you and me. I tell her do right thing. Sometimes she do other things. Some stars move different.

I’ve often said that if a book is not worth reading twice, it’s not worth reading once. Eye of the Diamond-T is a book I could read again. And I likely will, because I didn’t catch everything on the first go. I need to start over and read it on its own terms. It moves different.

In my book, this is pretty high praise.

16 thoughts on “Eye of the Diamond-T: A Review, of Sorts”