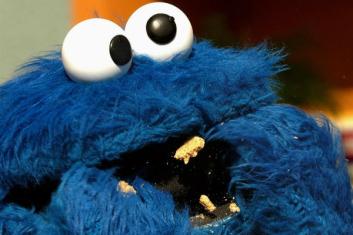 Some autumn days are so crisp and wonderful that when you wake up to them all you want to do is get right out and enjoy them. When Cookie Monster woke up to such a day, he decided to enjoy it by taking a long walk on which he could eat lots of cookies. So he put on his coat and shoes, filled his backpack full of cookies, grabbed his walking stick, and shut his front door behind him.

He followed the road until it ended at the edge of the woods. He removed a cookie from his backpack and ate it. This meant shoving the cookie into his mouth, chewing madly and saying om nom nom while most of the cookie crumbled to his feet.

He stepped onto the path that led into the woods. The morning sunlight shimmered in the leaves moving with the breeze. He om nommed another cookie and followed the path around twists and turns. Some of the forest animals who were still in bed heard him om nomming and said, “there goes Cookie on one of his walks again.”

When the path ended at the bank of a gurgling brook, Cookie Monster stopped to think about what to do next. He om nommed another cookie. He decided it was far too nice a day (or maybe that he had far too many cookies remaining) to go back just yet, so he pressed on.

He walked up another hill and down one more. He crossed the same gurgling brook again. He climbed another hill, and when he came down he found himself in a big, wide-open field.

As he stood in the big, wide-open field, he realized he was now quite hopelessly lost.

He worried. Being lost was never good thing to be. And it was getting dark. Too dark to find his way back.

He decided that building a fire and camping for the night would be a good idea.

But being in a big, wide-open field, he had no wood to gather for a fire.

He dumped the cookies out of his backpack onto the ground. He set one aside, then scooped the rest into a pile, took out his flint and steel, went flick flick flick, and made a spark. The spark fell into the cookies, and the cookies went whoosh into a nice-sized fire.

Cookie Monster rubbed his hands together and got them nice and warm against the flames. He curled up into a tiny blue ball around the fire, using his backpack for a pillow, and dreamt of cookies baking in a toasty oven. All through the night, he sniffed and smiled and said coooookieeee in his sleep.

When the sun came up, he yawned and stretched and scattered the coals of his cookie fire, because he knew you were never supposed to leave a campfire without scattering its coals.

Then he put on his coat and shoes and backpack, picked up his walking stick, and headed for home.

Along the way, he made up a song called “C is for Campfire,” which he sang to the tune of another “C” song you might already know. This, of course, between om noms of his breakfast cookie, which he’d been wise enough to set aside the night before.

He was home by mid-afternoon, just in time for a late lunch (or early dinner) of more cookies.

(Which, by the way, is fine for a Cookie Monster, but not very good for you and me!)

23 thoughts on “C is for Campfire: A Cookie Monster Fan Fiction”